The history of the company has deep roots, spanning time as well as distance. Originating in Turi (Province of Bari), in the early 1900s, where the tradition of vine cultivation and wine production had been handed down for generations. Modesto Dell’Aera, viticulturist and vintner, passed on not only his knowledge but also his entrepreneurial resourcefulness to his son Pasquale.

At the end of the 1960s, a young Pasquale was offered an important job opportunity, converting and redesigning numerous lands scattered throughout the Calabrian regional territory. Initially he was reluctant in accepting the offer, he would have had to leave, albeit temporarily, his family and his beloved Turi. However, the proposal was very tempting and the opportunities for growth evident, persuading him to accept the offer. 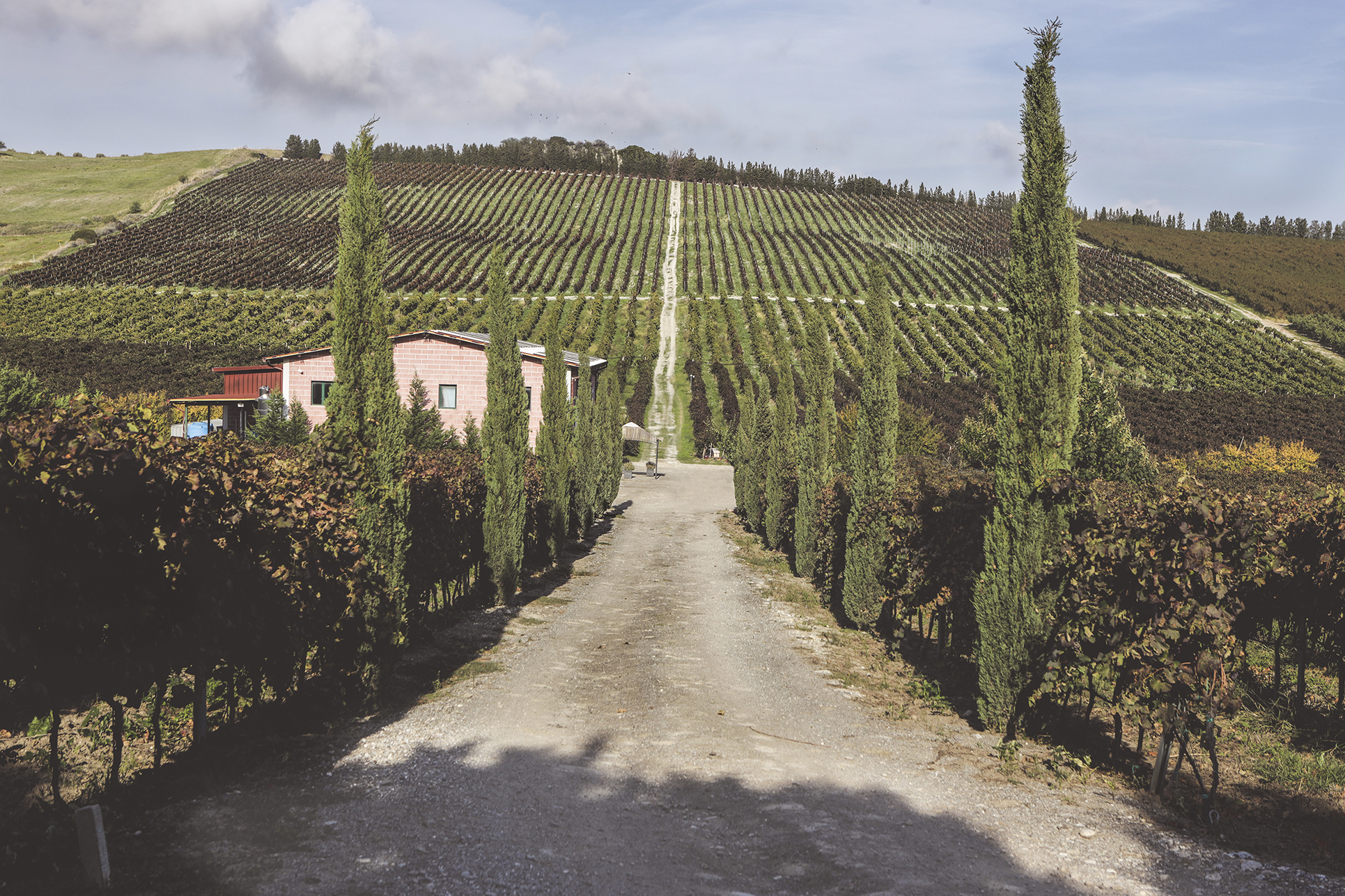 Arrived in the Grandine valley he found himself in front of a breathtaking landscape, a succession of gentle hills and fertile plains surrounded by two rivers, the Simeri and the Uria, a few steps from the sea but with the snow-capped mountains of the Sila Catanzarese behind it. It was love at first sight! The thought of investing in that wonderful land began to creep into his mind but what convinced him to take this important decision was the abundance of water in this area; priceless wealth especially for those who, like Pasquale, came from a long lineage of farmers who often saw their crops lost due to its shortage.
It was 1973 when the decision became final. Pasquale sold the properties in Puglia and moved to Calabria with his family, a difficult choice but materialized thanks to the initiative and foresight of his wife Elisabetta. The first property purchased was precisely “San Giacomo” followed by Maddalena where he planted the first vineyards after years of selection and research on rootstocks and cultivars that would have best expressed themselves in this area, while continuing to follow numerous companies as a consultant. 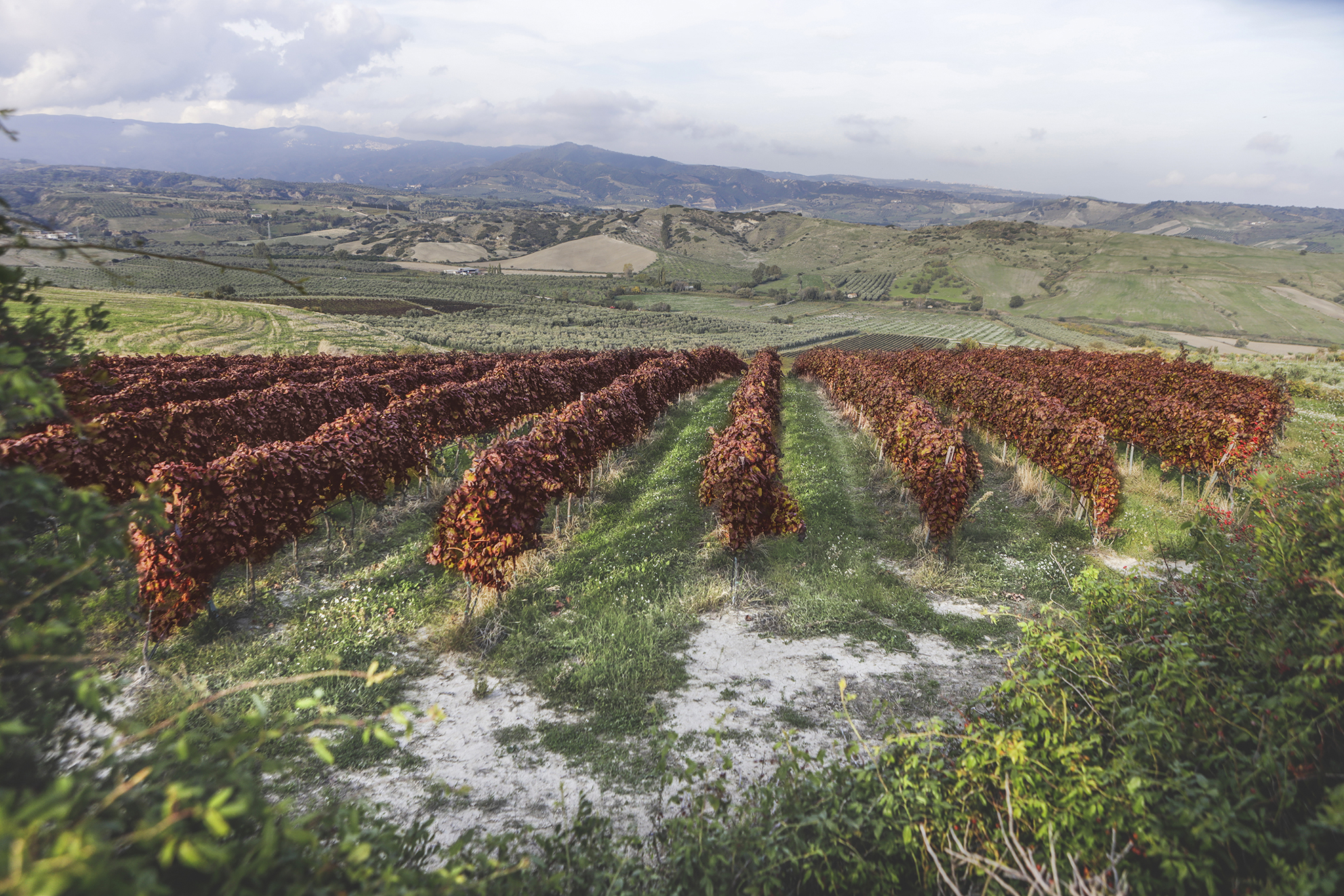 For Pasquale agriculture was a passion but the years went by and country life is certainly not a walk in the park, the time had come to pass the baton to his son Vito who had been involved in the family business since the end of his studies. Thanks to his dedication and the tireless support of his wife Rosaria, he managed to further expand the company surfaces, by purchasing the “Laca” and “Cantorato” estates. Still today, the management and organization of all agronomic operations take place under his essential guidance. 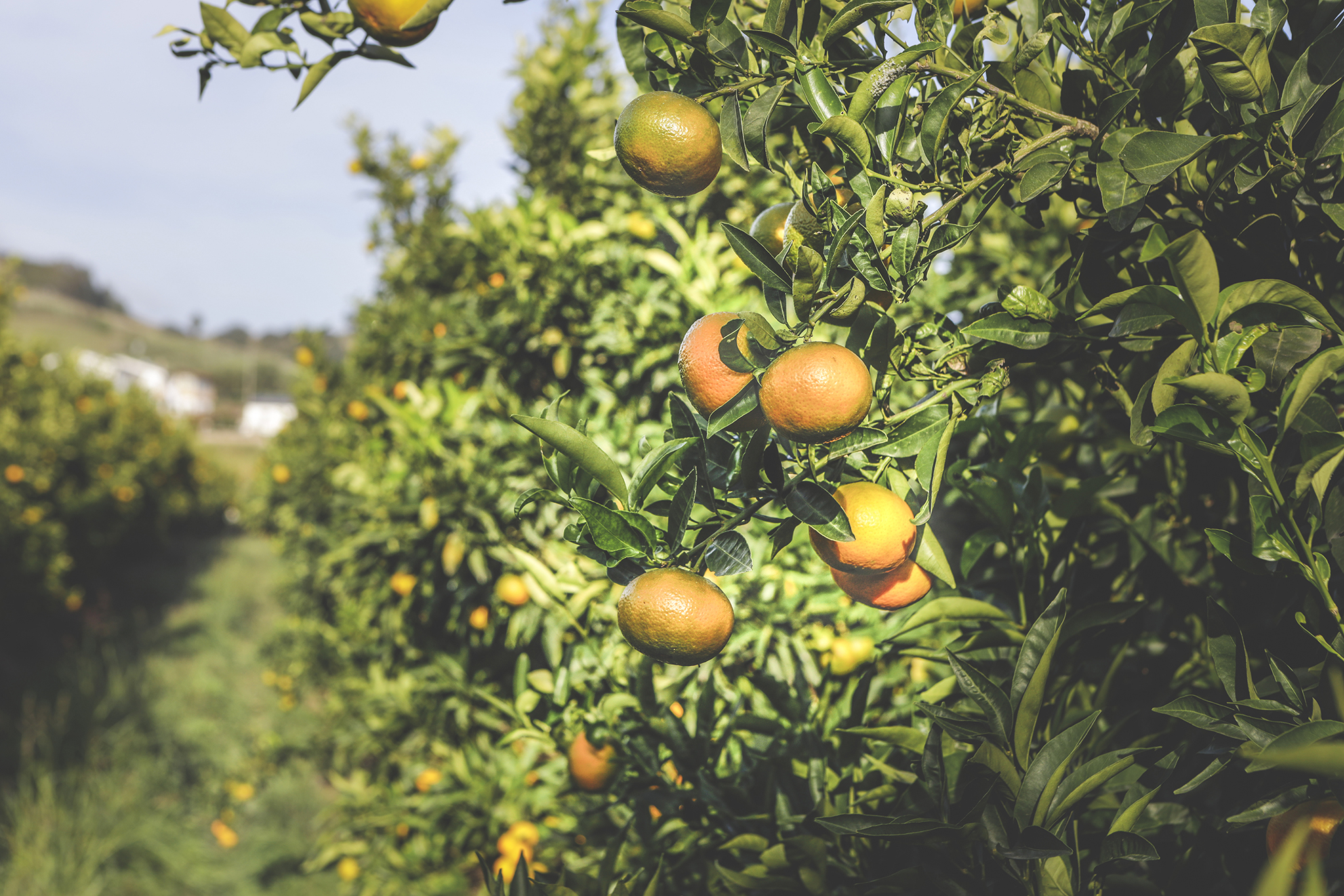 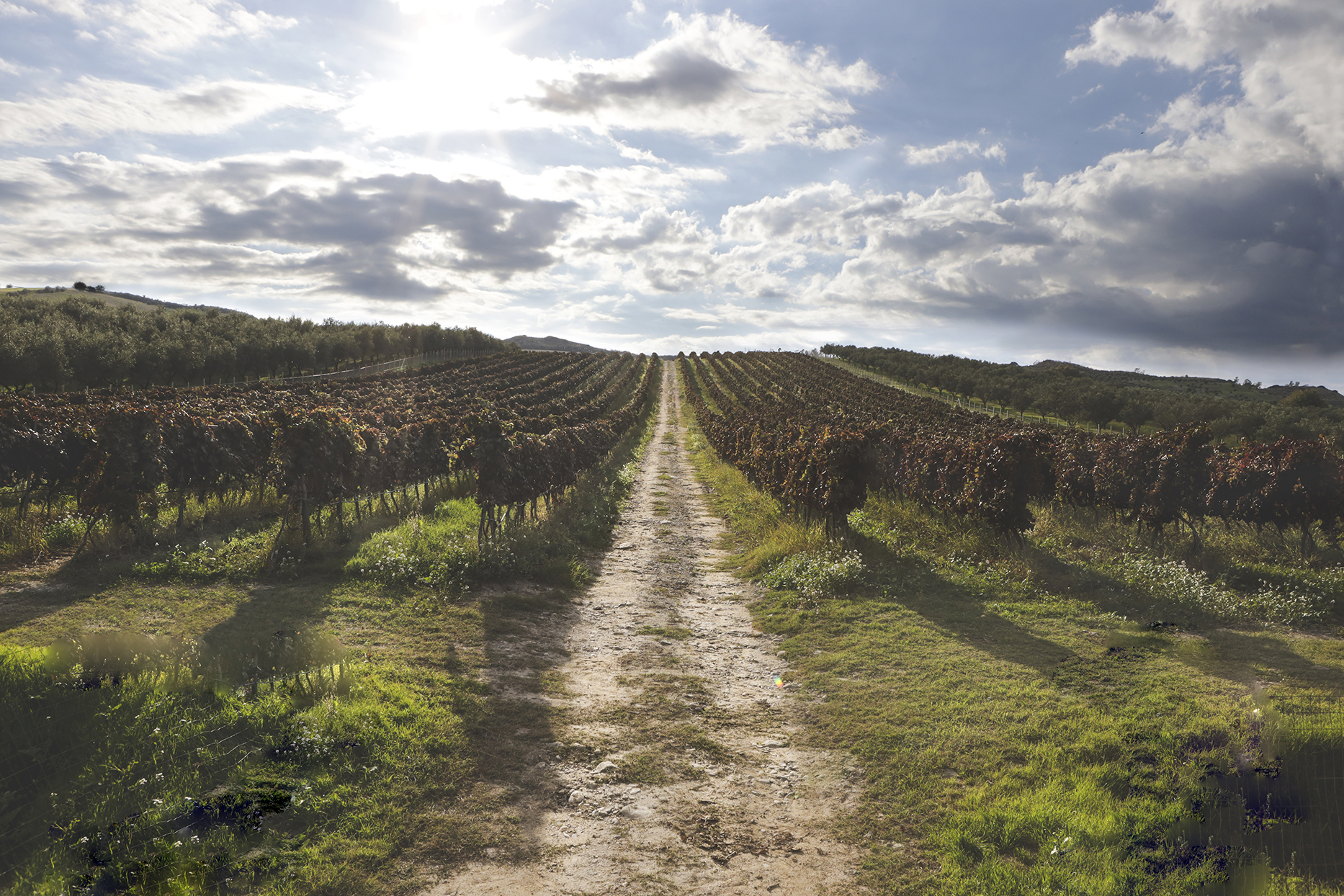 In 2008, having completed his training career as an agrotechnician, his son Matteo, showing great interest in winemaking from a very young age and driven by the desire to resume a tradition that had by now become secondary, dedicated himself with commendable dedication to the creation of a much larger project than his 19 years. In a few years, the dream of making wine from grapes produced with passion and sacrifice took shape. Matteo’s goal was clear, it was necessary to aim immediately to produce high quality wines and it is precisely for this reason that the cellar was set up with the best technologies on the market.
After years of study, testing and work, finally, with the red of the 2013 vintage we obtained the characteristics we were looking for in a wine that was supposed to represent us around the world. Thus was born our first label, the “GRANDANE“.

THE ORIGINS OF OUR LOGO
Our vineyards overlook the wonderful gulf of Squillace, also known as the “Baia dell’Ippocampo”, a name due to the numerous specimens of seahorse that inhabit these waters. The presence of this magnetic marine creature is a source of pride as it is considered an indicator of the healthiness of the seas that host it. Furthermore, in Greek mythology, the hippocampus is a symbol of good luck, in fact it was depicted intent on bringing the girls who fell into the sea to safety.

PHILOSOPHY
Since a quality wine is born first of all in the vineyard, all the systems have been carefully studied to ensure that the different grape varieties respect their cultural and environmental needs. The specific training system for each variety, a low number of bunches per vine and the mainly clayey-calcareous nature of the soil, allow us to obtain full-bodied, balanced wines with distinctly fruity scents. The harvest takes place following a careful evaluation of the degree of ripeness of the grapes, for which we make use of modern analysis technologies. The selection of the best bunches is guaranteed by strictly manual harvesting. Finally, the use of small crates allows us to preserve the integrity of the grapes until they quickly reach the cellar located among the same vineyards.

ENERGY SUSTAINABILITY
From an energy point of view, our company has a positive balance as the energy we produce from renewable sources is higher than the one we consume, allowing us to close the entire transformation chain with green energy.

CHOICE OF CAPS
We know well how fascinating the moment that precedes the tasting of a wine is, when together with the closest people you go with a romantic gesture to uncork a bottle and sniff the cork to confirm that the cork closure has “hopefully” done the his work while preserving the product with the same characteristics desired by the manufacturer. Unfortunately, since cork is therefore a natural product, a bitter discovery is often made that ruins the charm of that long-awaited moment. After so many years in search of the best stopper to guarantee our consumers a product that is always at the top, starting from the 2019 harvest, we have decided to abandon cork, in favor of the most innovative and eco-sustainable stoppers produced with materials derived from sugar cane, 100% recyclable, with low environmental impact with zero carbon footprint, capable of guaranteeing a constant and well-defined evolution process and zero bottles with organoleptic deviations or differences between bottles with a wine shelf life of up to 25 years. So all lovers of our wines will have the guarantee of never again finding a bottle with the dreaded corky smell. 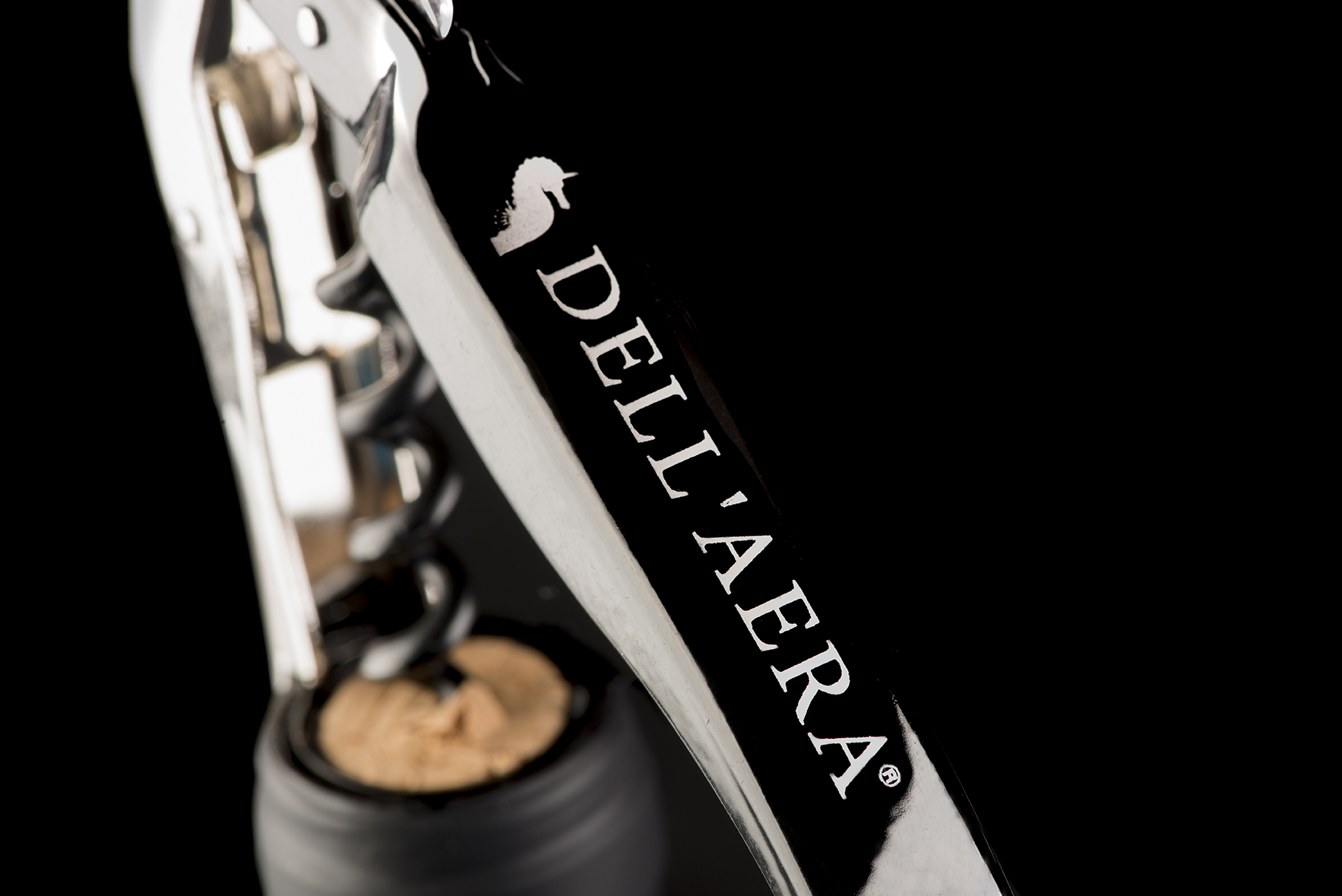